First performed on a student composer concert at the University of Michigan in April, 1994. Later premiered in its clarinet trio version at "June in Buffalo" at SUNY Buffalo on June 5, 1994. Saxophone version was publicly premiered by the Salt Lake City Contemporary Music Consortium on January 22, 2000. The clarinet version is recorded on MSR Classics by Maureen Hurd (cl), Blair Mcmillen (pno), and Curtis Macomber (vln).

...labyrinth of flames... was originally composed for Eb Alto Saxophone, Piano, and Violin. It was premiered in its version for Bb Clarinet, Piano, and Violin on June 5, 1994 at the "June in Buffalo" conference at the State University of New York, Buffalo. The clarinet version makes only minor changes to the saxophone part. The work, conceived as a musical poem, is in three sections. The opening, "...labyrinth of flames...," is a fiery introduction, during which many arrow-straight gestures eventually become distorted until a sense of regular pulse (as heard) is defeated, after many a valiant effort. Following a definite break, the second section, "Mazemarch," begins. The piano provides an irregularly-phrased quasi-deathmarch, moving from its center register to its depths, creating a chord progression out of one "hyper-chord" that will eventually end the work. The violin plays an ever-yearning melody while the saxophone supplies more animated commentary. After a moment of religioso repose, the third section, "Mist, dust, eddies, swirls," eases in in the form of non-rhythmic chatter in the piano and saxophone. This crystalline world of quiet, seemingly randomly placed sounds (as heard) offers a final sanctuary, a Garden of Eden, to the fire and brimstone of before. The closing measures recall the once-ferocious trills of the introduction above the pianoÕs once-fearsome chord.

For the sale by the composer. 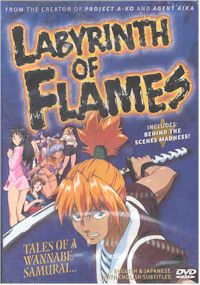