I. Musica Ventus (Music of the Winds) The composing of the whole concerto began with the opening chord, which is a simple, grand guitar chord. (The guitar does not actually play this chord until a climactic tutti near the end.) Beyond this chord this is just plain music—inspired by Bach's 6-part ricercare from the Musical Offering in the sense that I set out to create a web of linear polyphony using tonal fragments in a simple anticipation-suspension motif. 3- to 6-part polyphony is in effect at nearly all times. The key structure basically cycles around the circle of fifths, from three sharps back to three sharps, concluding with an improvised cadenza in A major. Three sharps is a "guitar" key; the final movement will be in a "band" key (three flats).

II. Musica Terra (Music of the Earth) This movement is a down-and-dirty rocker. For a title, I could not resist referencing certain rebellious slogans on an eastern North Carolina watertower by which my friends and I drove a hundred times in our late teens. The watertower of Knightdale, just east of Raleigh, carried the graffiti for years and years before someone covered it up—three silly, exuberant logos: "Rock Out" "Van Halen" "joint". It begins and ends in the key of E minor, the ultimate rock guitar key (1 sharp) to me. This is a double set of variations, tonally adventurous, rhythmically exciting, flip-flopping between a slowish, funky beat and its high jinks double time.

III. Musica Celestis (Music of the Heavens) This is my fabricated religious vision. I sit on a Kansas hillside watching the sky, I drink in nature, I summon my benevolent power from the skies, A benign Presence shockingly responds with increasingly more to say, eventually overwhelming and awing me, bringing more than I bargained for.

The running 8th notes are the air, the environment, everything alive on this planet; I am the guitar; the voice of the Presence is a 4-part chorale, never the same phrase twice, rhythmically or harmonically. Only 7 different pitches are ever used (key of 3 flats). The running patterns (7 of them, in lengths of 3, 5, 7, 9, 11, 13 and 15 8th-notes) never change, regardless of instrumentation or temporary fade-outs of a given line; it is always controlling life from the background. A quilt is created, in which harmonies never repeat themselves in the duration of the movement. My work was in the orchestration and carving of patterns out of this monolithic structure. The Presence arrives and fades, and I am humbled into accordance with the plan. My final "words" are the 7 patterns themselves, and they depart as I demonstrate that I have learned them.

Published by Edward B. Marks Music Company and on rental via Hal Leonard. 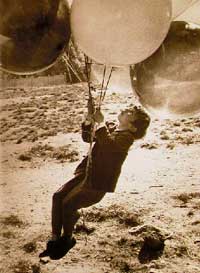